Candy Pain makes her competitive wrestling debut against the tough and tenacious Minxy Li of London.

Candy was still wearing her thong leotard and tights from a previous video. So Minxy grabbed a pair of tights as well, suiting up with her fringe bikini and war paint. The tigress vs the huntress!

The ladies fight for submissions and 3-count pins. Minxy is an aggressive wrestler who pushes the pace throughout the bout, fighting fiercely against her larger opponent. Candy rises to the occasion, matching Minxy's speed and getting swept up in the intensity of the bout. Minxy's skill and ferocity can be intimidating to a newcomer, but Candy dives right in.

The ladies push themselves to exhaustion, escalating the physical intensity as the match progresses. The tights are slippery, adding to the challenge and emphasizing the ladies' legs. The ladies work for body scissors, armbars, smothers, and pins. The match is dynamic, and athletic. It's fast and furious wild pantyhose wrestling! The winner celebrates with a hard-earned victory pose.

Posted by Diablo at 8:47 AM No comments: 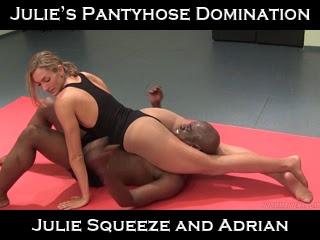 Julie Squeeze presents the crushing power of her nylon-clad legs in this one-sided mixed domination video.

Adrian's neck gets put to the test as Julie forces him to withstand her head scissors and figure 4's. Julie also shoves her feet in Adrian's face, body scissors him, slaps his body with her feet, punches his belly, and stands with her full weight on his body.

Julie doesn't hold back with her squeezing, causing beads of sweat to form on Adrian's brow as she scissors his head and body. She works him through long holds, and Adrian hangs on as best he can, until he eventually submits each time. Julie smiles as Adrian calls for mercy, amused to be so abusing her victim. She concludes with a victory pose.

Posted by Diablo at 8:39 AM No comments:

VeVe takes on visiting wrestler Mistress Kara from California in this rough and dynamic competitive bout.
Kara is a terror on the mats - powerful and surprisingly fast. VeVe is petite, but a powerhouse in her own right - agile, focused, and highly skilled.

They fight at an exhausting pace, pushing each other's stamina and working hard for submissions. Kara puts her strength advantage to good use, but VeVe holds her own and angles for the perfect moment to strike.
These two tough and tenacious competitors leave it all on the mats in this grueling, sweaty, athletic wrestling battle! Most submissions wins.

Posted by Diablo at 7:33 AM No comments:

From our October live event...

Venom takes Conrad completely by surprise, immediately countering his first takedown attempt and punishing him with a strict, tight chokehold. Slightly shaken but still game, Conrad resets for another go... but it's all downhill from there.

Venom outclasses Conrad in every way, punishing him with numerous submissions, tight grips, and rough handling. It's a humbling domination!

Conrad is shocked to be so manhandled, and his embarrassment only increases when Venom holds several chokehold submissions just past the tap-out. Venom clearly revels in her superiority and enjoys destroying her opponent, making things even worse for him by working him into a lotus lock! And she celebrates her win with a camel clutch victory pose. Venom is just so rough on the boys!

Posted by Diablo at 7:27 AM No comments:

Azy is a kickboxer and surfer from New York who's been grappling for 8 months. She's quick, sporty, and athletic. Julie isn't worried, coming into the match with her legs ready to lock on her trademark squeezing scissorholds.

Will Azy's speed get past Julie's crushing legs, or will this be a baptism by fire for the newcomer?
The ladies have never met before, so there's tension in the air as they tangle on the mats. A live audience adds to the pressure. The match is two rounds of 7:30 (15 min). Most submissions wins, with only one lady claiming victory in the end.

Posted by Diablo at 8:02 PM No comments:

Venom is tenacious, incredibly skilled, and very quick, with a threatening guard and an arsenal of submissions at her disposal. VeVe steels herself for the challenge and rises to the occasion, clashing with Venom for a tense grappling battle before a live studio audience.

Determined to stay active and aggressive, VeVe works hard to combat Venom's guard game, as Venom launches submission attacks and sweeps. After 2 official rounds, the ladies are forced into a 2-minute pins & submissions overtime round to determine a winner.

Match is two rounds of 7:30 each, plus 2-minute overtime.

Posted by Diablo at 7:57 PM No comments:

Candy Pain welcomes newcomer Justin onto the mats by putting him through the wringer! If Justin wants to wrestle with our tough ladies, he's got to make it through Candy's punishing pro-style holds first. Time to find out just how flexible Justin's spine can be...

Candy, in her black tights and tiger stripe thong leotard, works Justin over with a variety of her favorite, back-bending holds. Holds include (and often repeated):

Candy's holds are tight and prolonged, and she bends Justin to his limits. Justin takes the punishment like a trooper, grimacing in pain as Candy works him over. She talks to him the whole time, describing her holds. She finishes up with a victory pose over the thoroughly dominated newcomer. A great display of confident physical control by Candy Pain!

Posted by Diablo at 7:05 PM No comments: