Orlandoe and MMA fighter Mahea meet for the first time for a competitive wrestling match with varying rules for each round.

Since both ladies are blue belts in jiujitsu, they start off with a 10-minute round wearing their jiujitsu uniforms (gi). In this round, points can only be gained via submissions, though sweeps and reversals are important for gaining dominant positions.

In the second 10-minute round, the ladies shed their uniforms - Orlandoe wears a thong bikini and Mahea wears a sports bra and shorts. In this round, the ladies attempt to score points by submissions and pins (3-count, both shoulder blades down).

Mahea and Orlandoe are even in the first 2 rounds of competition, testing each other and coming out equally, with neither gaining control over the other. So, after a scoreless first two rounds, the match moves into a Sudden Death overtime 3rd round. The ladies choose to wear jiujitsu uniforms for pins and submissions. So they put their uniforms back on and grapple until a point is scored. Whoever scores the first point, either by submission or pin, will immediately emerge as the winner.

Posted by Diablo at 7:31 AM No comments:

Time for some hard falls!

This mixed judo throw video is devoted to the Tomoe Nage throw, also known as the "Monkey Flip," "Stomach Throw," or front sacrifice throw. If you like the Tomoe Nage, you'll find a lot of it here!

VeVe portrays Hanz's judo sensei. The lesson for today is the tomoe nage throw. VeVe explains the basics of the throw to Hanz, demonstrating on him several times. She then allows him to practice by throwing her (lesson time: 9 minutes).

Once VeVe is satisfied that he has learned the throw, she offers him a chance to try it in a sparring situation. In their match, they will only use the tomoe nage throw. And every time someone scores a throw, he or she must finish the opponent with a submission attack (armbar, chokehold, triangle, etc). VeVe and Hanz reset to standing each time, fixing their belts and uniforms.

In their athletic bout, VeVe scores the majority of tomoe nage throws, but Hanz throws VeVe several times as well. The throws are fast, with some hard landings. In the end, VeVe scores the most throws and wins the match, concluding with a foot-on-face armbar and then a foot-on-groin victory pose. 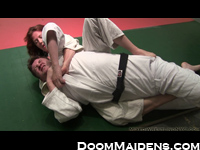 Posted by Diablo at 3:12 PM No comments:

A fierce and suspenseful competitive mixed match from this week!

Kim is a passionate and experienced wrestler, but Hanz is definitely ready for her. He's been training hard, studying her moves, and bringing his stamina to an impressive level. Both wrestlers come on hard, pushing the pace for the entire match and trading submissions throughout.

Kim fights with heart, fire, and technique, but Hanz has some surprises for her, including his own debilitating body scissors attack. He pushes Kim to the limit, wearing her down and making her angry. She has to be mentally tough to meet this incredible challenge!

A fierce and evenly-matched competitive bout, suspenseful, emotional, and high-scoring on both sides. All submissions are legal.

Posted by Diablo at 4:26 PM No comments:

Who's got the strongest squeeze for summer 2013?

The ladies get together one summer evening for a bit of fun: a scissoring contest! And to judge the contest, Orlandoe introduces her friend Benji. Judge Benji will receive scissors from each of the ladies and make his decisions from the experience.

VeVe, Indra, Orlandoe, and Amazon Annie each take turns competing to see who has the strongest, hardest scissor hold in the following 3 categories: basic head scissors, reverse head scissors, and body scissors. Each contestant will squeeze as hard as she can in order to impress Benji and make him tap out as soon as possible. Benji will then select a winner for each scissoring category. Whoever emerges as overall winner gets to take a bonus round.

The scissor holds are hard and fast. Benji tries to hold out as best he can, but it is impossible to resist for long. Each of the 4 ladies takes one turn in each of the 3 categories. The overall winner performs a more prolonged reverse head scissors as her bonus round.

Posted by Diablo at 1:03 PM No comments:

VeVe wears her new latex outfit - thigh-highs, skirt, and turtle-neck sleeveless top - and Jay wears his latex shorts. They both then cover themselves in silicone lube and get to work. The silicone lube is extremely slippery and, unlike oil, it does not absorb into the skin, keeping the wrestlers, the mats, and the latex slippery and shiny for the entire match.

The incredibly slippery environment is a tremendous challenge, and Jay finds maneuverability quite difficult. VeVe, however, handles herself amazingly well, sliding gracefully along the mats, hooking onto Jay, climbing on him, and submitting him multiple times. "How is this possible?!" Jay exclaims.

It's a good-spirited match, with banter and trash talk from both opponents. VeVe scores all of the submissions, while Jay, struggling to keep up and helpless in the slipperiness, cannot score any. It becomes hopeless for Jay as VeVe takes over and dominates the match. Great shine on both the skin and the latex. Impressive maneuvering by VeVe! She concludes with a proud flexing victory pose.