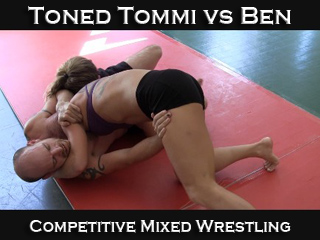 Pro female MMA fighter Toned Tommi is back again in NYC, and this time she takes on Blazin' Ben in a full-out competitive mixed wrestling match!

Ben is a former high school wrestler (pin-style), and takedowns are his preferred method of attack. Tommi, though, is better versed in jiujutsu and submission attacks. Ben blasts into the match with powerful throws and takedowns, his wrestling background posing a strong threat on the feet. Tommi works to keep her composure and launch grappling counter-attacks.

But while the pin-style wrestling defense is to go belly-down, belly-down is the last place you want to be when chokes are in use. Tommi takes advantage of every opportunity to capitalize on Ben's style vs style difficulties, locking on submissions fast and mercilessly.

And after a few hard landings, Tommi puts some extra spice into her jointlock attacks, paying her opponent back with a vengence.

All submissions are legal
(except for heel hooks)

Posted by DoomMaidens Wrestling at 11:52 AM