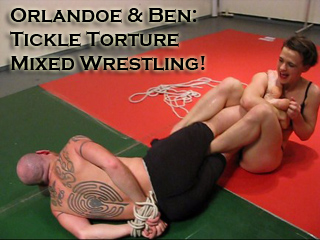 Ever wily, Orlandoe approaches Ben and asks if he would like to try bondage wrestling with her. Ben agrees. But as they prepare for the match, Orlandoe jumps the gun and ties Ben's hands behind his back.

Orlandoe rejoices at her opponent's helplessness, and ventures in to tickle the soles of his feet. Ben turns out to be very ticklish on his soles, and Orlandoe decides to amuse herself by tickling him senseless.

She wrestles him into various holds as Ben futilely struggles to avoid the merciless tickling. Every time Orlandoe catches Ben's legs and feet, she tickles his soles relentlessly! Once she's had her fun, Orlandoe ends with a victory pose.