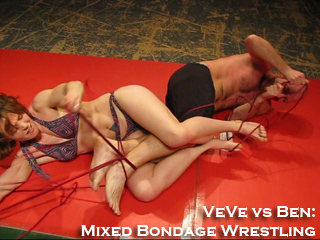 Part 1: Bondage Wrestling
Blazin' Ben challenges VeVe to a bondage wrestling match. He's a strong wrestler, but he's never faced VeVe with rope involved. And the ropes VeVe brings along for this match are thin and pack a harsh, painful bite...

VeVe and Ben begin the match with an athletic display of competitive mixed wrestling. But as soon as VeVe gets her hands on the rope and secures it around Ben's limbs, his explosiveness starts to diminish. The bite from the rope helps immobilize her opponent as VeVe works for a hogtie.

The round ends once VeVe successfully gets Ben face down and binds his ankles and wrists in an "open" hogtie (she holds the ends of the wrist & ankle ties in her hand). As VeVe plants her foot on his back, Ben argues for a second chance. After teasing him for losing, she agrees and begins to untie him.

Part 2: Hogtied & Taunting
At the conclusion of Part 1, Ben, laying on his belly and tied at the wrists and ankles, argues that VeVe should give him a second chance at the match. VeVe agrees, releases him, and lets him up for another go.

This clip starts with VeVe finishing up a tight hogtie on Ben following his second wrestling chance. As he's belly-down, she snuggly binds his wrists to his ankles for the classic hogtie. And there the fun only begins.

While he's hogtied, she taunts him badly, pushing him around, sitting on top of him and belittling him, pushing him into a kneeling position, tickling the soles of his feet, twisting his nipples, squeezing his head with scissors and triangles, and laughing all the while.

She finally tortures him into saying "please" to her. However, she declares that she doesn't want to hear any more from him, and so gags him with a classic ball gag and, after striking a victory pose, she leaves him there, hogtied and gagged. 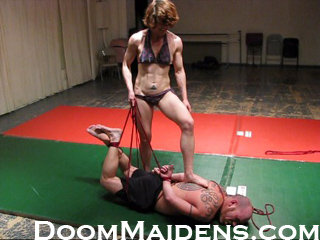 Posted by DoomMaidens Wrestling at 7:45 AM