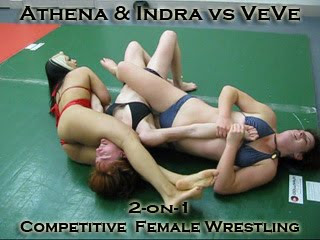 In our first ever all female 2-on-1 competitive submission wrestling match video, Athena and Indra form "Team Britain" to gang up on VeVe.

This is a full competitive match for submissions and pins. All submissions are legal, and pins must be held for a count of 10 seconds.

VeVe's wrestling skills are put to the test as Athena and Indra use team work, crushing pressure, chokes, and nasty scissors attacks to turn up the heat.

VeVe fights with tenacity, skill, and impressive strength in this bout, but does she have what it takes to make it through the gauntlet of Team Britain?

This match is 20 minutes long, made up of two 10-minute rounds.
Most submissions and/or pins wins. 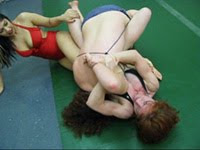 Posted by DoomMaidens Wrestling at 8:55 AM No comments:

Mixed Wrestling in Tights, Bodysuit vs Jockstrap, and More! 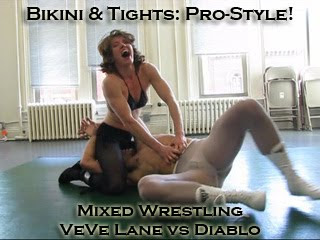 In this Pro-Style mixed wrestling match, VeVe (dressed in her black bikini, pantyhose, and boots) takes on Diablo (dressed in jockstrap, tights, and boots) for some back-and-forth holds and action.
After trading holds and throws, VeVe catches Diablo with the dreaded Ab Claw. She pins him and digs her fingers into his belly, causing him to scream in pain and declare his submission ("I give, I give!"). VeVe holds the Ab Claw, forcing Diablo then to beg and plead for release. Once she's satisfied with his submission, she finishes with a victory pose.

2. Bodysuit vs Jockstrap w/ Bondage (VeVe and Diablo)
At our clips4sale store: http://www.clips4sale.com/store/47489 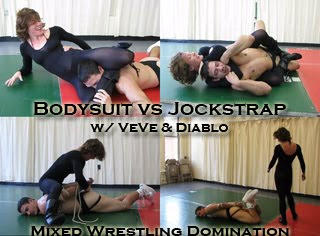 Dressed in her black nylon bodysuit and boots, VeVe takes on Diablo for what turns into a domination wrestling scene.
Diablo enters the match bravely, dressed only in a jockstrap (and thong), but, after a back-and-forth battle, VeVe catches him in a choke hold and knocks him out. While he's out, VeVe ties him up in a hogtie for her own enjoyment.

Diablo wakes up and, to his distress, discovers he's been bound hand and foot! VeVe stands over him and taunts him, laughing as he struggles in his bonds. Diablo demands and then pleads for his release, but VeVe simply laughs, refuses, and leaves him alone on the mats in his rather vulnerable state.

Available at our clips store: Mixed Wrestling NYC
Posted by DoomMaidens Wrestling at 10:04 AM No comments: