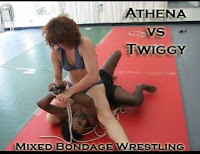 Athena tries her hand at mixed bondage wrestling. And her opponent Twiggy is in for a rough time!

Using a very forceful and physical style, Athena sets out to snare, control, and immobilize Twiggy, who meanwhile struggles in attempts to escape.

With Athena pinning him, though, Twiggy doesn't make much progress at evading Athena's ropes. It's a demoralizing struggle for him. Athena's physicality and size advantage serve her well in capturing and binding her opponent.

Available as a download at the Doom Maidens video store:
http://www.doommaidens.com/store/athenatwiggy/

And catch the trailer here: