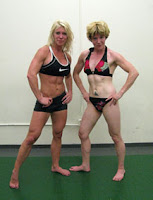 Some of you know Ginger (aka "Hot Muscle Mom") already.

Some of you may remember her from her match against VeVe Lane in June 2010.

Many of you have seen the trailer for that match: http://www.youtube.com/watch?v=2e_bMcRvdP8

Now Ginger is coming back to NYC at the end of July, and we've been pondering setting her up with a match against Orlandoe. 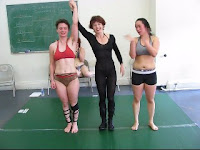 Orlandoe has challenged VeVe on several occasions during in-house competition, including both a wrestling bout and a hardcore catfight. And let's not forget to mention Orlandoe's "dive bomb" attack on VeVe during VeVe's bondage wrestling victory pose over Athena.

And Orlandoe was crowded Champion at the Showcase Tournament this past June, defeating Lily and Indra to rise to the top in our local competition.

An Orlandoe vs Ginger match-up looks like it could have some great competitive energy, considering the potential combattants.

If this match interests you, if you are interested in joining a sponsor pool for it, or if the possibility of it tickles your fancy even a little, then please let me know. You can respond on list here, or write to me off-list at sessions@doommaidens.com

Posted by DoomMaidens Wrestling at 4:41 PM