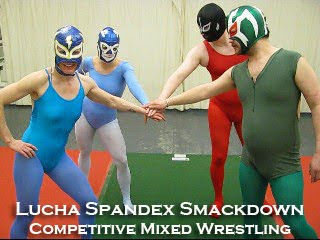 VeVe Lane, Orlandoe, Hanz, and Jason get kitted out in their respective colors for 3 separate types of matches:

Match 1: VeVe & Orlandoe (Team Blue) double team Jason (Green) in a bondage wrestling match. The girls are skilled in rope-tie wrestling, so Mr. Green stands no chance against them.

Match 2: VeVe & Orlandoe (Team Blue) enter a tag team mixed wrestling match against Jason (Green) and Hanz (Red). They start out fighting 1-on-1 with tag-ins, but eventually both ladies jump in at the same time, so the guys follow. And we have two matches at once on camera!

Match 3: VeVe (Yellow) teams up with Jason (Green) in a couples bondage match against Orlandoe (Blue) and Hanz (Red). Each couple breaks so that the opposing boy fights the opposing girl, resulting in two simultaneous mixed bondage matches.

Each match is 10 minutes long (30 minutes total).
All 3 matches end in with victory poses by the winning wrestlers! 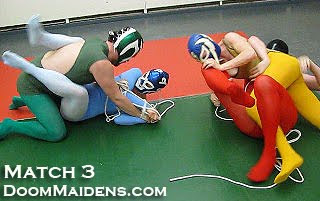 Posted by DoomMaidens Wrestling at 9:02 AM