VeVe and Clobberetta released their "inner bullies" on poor little "ShortFuse" Mark this past Saturday. Two video matches resulted. Here's what came of it...
#1..... 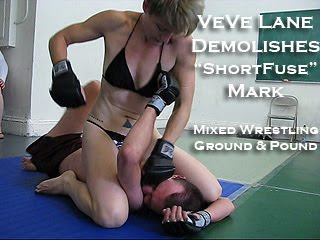 "This is suicide," says ShortFuse Mark in his opening interview. Indeed, it nearly was.

Fool-hardy Mark agrees to an MMA-style rematch with VeVe Lane, after suffering a hopeless defeat in their first straight wrestling encounter. Despite Mark's best efforts, his lack of strength and skill results in his complete domination.
VeVe manhandles him with chokes, armbars, and a vicious ground & pound: a flurry of punches to the face and body!

While poor Mark pathetically tries to defend himself, VeVe takes great pleasure in beating him into the floor.
VeVe Lane: 5'4" and 120 lbs
ShortFuse Mark: 5'10" and 135 lbs

And finally, for you VP fans, VeVe strikes some great victory poses at the end!

This match is three 5-minute rounds, for a total of 15 minutes of athletic mixed wrestling MMA domination.

DVD and Downloadable: http://www.doommaidens.com/store/vevegroundandpound/
And the trailer at Daily Motion:

Posted by DoomMaidens Wrestling at 7:26 AM