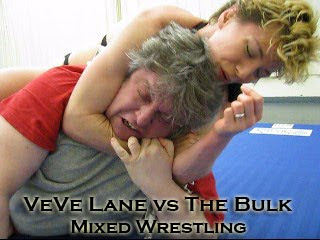 The Bulk and VeVe have always been at odds with each other, and they had met in wrestling combat before, but both had always claimed victory over the other. Now we'll see once and for all who can claim decisive victory, since this match is on video!
The Bulk comes in for a competitive bout, thinking to use his tremendous size advantage against the petite female wrestler. But VeVe uses her speed, agility, and artful submission skills to even up the odds.

It started out competitive, but once VeVe's endurance proved the better, Bulk faced a HUGE struggle to survive the final round.